Gayness has always been a controversial topic to discuss in Asian countries, especially the religiously more conservative ones in Southeast Asia. Even though it isn’t a taboo to talk about gay relationships in many of these places, it’s something that some people find uncomfortable discussing openly. In most cases, People turn their heads every time they see interracial relationships and often stereotype Asian gay men and transgender women as someone who won a lottery when seen with Western men. This is my first-hand account, as a gay Filipino who has been in relationships withe Western men.

To help you understand more the Western–Asian gay relationships, I asked my friends why some of them prefer foreigners over men in their own country and found out the reasons behind them. These are the most common answers I got:

It’s an open secret that one of the means for gay men to have their way to straight and younger men is through treats and money.

Western gay men, who go to East Asian countries to find relationship partners or sexual encounters tend to be generous when they can. That’s why white men are somewhat perceived as walking wallets, because of their ability to spend for their partners. Sleeping and being in relationship with Westerners, particularly white men, are also considered as a ticket to escape poverty in some places. In that sense, it’s really not much different than in heterosexual relationships, is it?

In Thailand, despite conservative traditions, male prostitution has become an industry (South China Morning Post). Secretive prostitution is rampant in bars and even male host clubs in major cities all over Thailand. In wealthy and advanced Japan as well.

Plenty of Asian men who venture in prostitution —even in developed countries like Japan — have financial problems. In fact, male prostitution in Japan has been featured in a documentary movie exposing some reasons why Japanese men get into the business of selling short-time intimate pleasure (Huffpost).

However, some Japanese men have other reasons why they sell their flesh to other men —to escape corporate slavery. Japan is legendary for its high-stress office jobs and working habits. It’s one factor behind the country’s extremely high suicide rate, and another factor behind premature death (and many illnesses) in general in the country. It’s also probably one of the reasons why some Asian gay men in developed countries prefer to be with financially stable Westerners. Then they don’t have to succumb to social norms and expectations of Asian societies that would require them to grind it out day after day as salarymen.

In her article in Reuters about the hidden world of male prostitution in Thailand, Chandran explained the sex industry behind the curtain of cultural tourism and Thailand’s nightlife —a scene I witnessed myself when I went to Thailand some years ago. 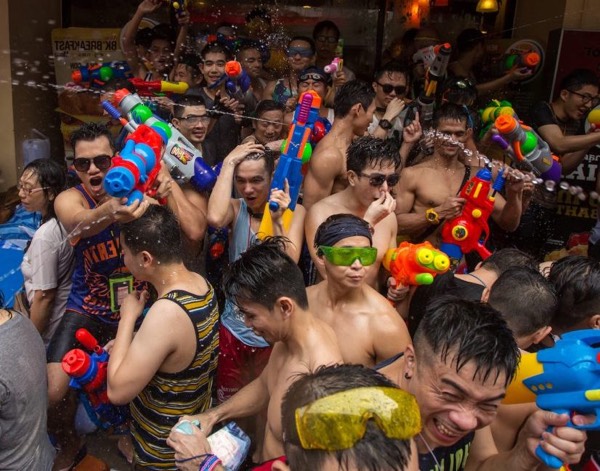 She emphasized how boys in poorer countries are enticed to prostitute themselves in many tourist areas in order to support their families in the provinces, especially that this kind of job doesn’t require strict qualification.

Similar cases were found in a study conducted in the Philippines where young men aged 18–25 were exposed to drug use and STDs because of prostitution in port areas.

In gay dating apps, several Westerners write “no money boys” in their profile to repel male prostitutes and “masseur” when traveling in Asia. As an Asian, It feels a little demeaning to read this phrase in dating profiles. Although I can’t entirely blame Western men from avoiding unwanted attention.

I feel slightly embarrassed to say this is why some Westerners are wary about relationships with Southeast Asian boys because they’re afraid they’ll only become a stepping stone to enter developed countries. Because of this, governments have become very suspicious of relationships between older Westerners and younger Asians.

Don’t get me wrong, Asian gays are one of the most hardworking people I know. They work hard without question with only one thing in mind: to help and support. They take jobs left and right without qualms of what kind of job it is as long as it supports their loved ones in need. This is also the reason why they’re taken advantage by their partners —it’s just hard for them to say no.

So if you ask Asian gay men why they prefer Westerners, some of them would say that they’re mostly tired of spending money for a relationship that doesn’t have any certainty. Although it’s not always the case, It’s a common story in most developing Asian countries of how gay men fall in love with the wrong person and spend almost all of their earnings to guys who will eventually replace them with real women.

It’s such a rare find to be in an interracial gay relationship where both parties are able to support each other financially.

Asia is one of the most culturally diverse regions in the world. Each country has its own unique traditions, culture and sub-cultures. Despite the cultural differences, Asians are known for two main things —being highly religious and strictly conservative.  This is the main reason why LGBTQs in Asia find it hard to stay happy in their relationships for a long time.

While a lot of Asian countries find transgenderism and gayness more and more tolerable, conservative family members still have difficulty accepting gay relationships in their family and the community because of religious and cultural views.

In an article in the South China Morning Post about how gay pride in Hong Kong struggles against a Chinese culture of prejudice fed by religion, they wrote that the LGBTQ are perceived by traditionalists as a threat to the patriarchal and heterosexual Chinese culture.  This is very common in most Asian countries mainly because parents want their children to inherit the family traditions and values so they can pass them down to their own children as well.  Having a gay son could break the passing of these traditions and is foreseen as problematic.

Another reason is religion. While the major religions in Asia (Islam, Christianity, Buddhism, Hinduism, etc.) may differ in religious beliefs and practices, they all believe that same-sex relation is unacceptable and therefore, condemn this kind of activity.

Living in a conservative society can be daunting when you’re different from everyone else. In an Asian community, it’s easy to become a center of ridicule for not following the conservative norms. Unlike in Western society, gossip is one of the most destructive forces in Asian communities, especially that Asians have high regards for family reputation and pride.

In order to escape the cultural prejudice of being in a same-sex relationship, some Asian gay men choose to be with Western men believing that the other side of the world would be more accepting to gay marriage or at least, mind their own business when it comes to relationships.

Some Asian gay men choose Westerners because of the openness to unusual sexual proclivities in modern society.

A research on sexual behaviors in Asian-Western relationships suggests that Westernization and modernization have contributed to the decline of traditional sexual conservatism in some urbanized regions in Asia and that it paved the way to premarital and casual sex.

Having an open-minded partner who’s willing to go all the way encourages Asian gay men to pursue their sexual fantasies and get out of their comfort zones. Bottoms look for bigger tools and tops look for dirtier fetishes and dominating roles; attributes that are hard to find in a genetically not well-endowed race (WorldData) and conservative upbringing.

To get a better chance of finding happiness in love

I always find gays as funny, bubbly and vivacious but deep within, they have plenty of heavy burdens they carry that they try to hide with their laughter and jokes. With all the financial, cultural and family problems that Asian gay men face in everyday life, it can be difficult to find happiness in love.

Unlike heterosexual relationships, gay relationships have a very different form of partnership considering that Asian gay relationships lack legal binding. In fact, Taiwan is the only country in Asia that recognizes and legalizes same-sex marriage (The Guardian).

Since there is no legal binding between gay couples in most parts in Asia, there is also very little ramification of infidelity in same-sex relationships.

Cheating has been one of the major reasons why gay couples break up. In research conducted on gay British men, it turns out that 52% of the participants cheated with their partner and 61% of gay men would break up with their partners once they found out that they are cheating.

Imagine this happening in the Asian gay scene where libido is always high and secrecy is part of the lifestyle in bisexual and discreet gays living in a conservative society. You can only imagine the impact of these breakups.

While plenty of gay men are becoming more tolerant with their partners engaging in sex with heterosexual and other gay men, couples often have to agree to certain conditions to allow their partners.

Because Westerners are more open to open relationships with their “liberated” lifestyle and views, some Asian gay men find it more compelling to be with Western men in order to enjoy other men while in relationship with the one they love.

On the other hand, some Asian gay men, just want to find the right person to be in a monogamous relationship.

And I believe that the more invested the person is, the more they’ll take care of their relationship. A guy who is willing to cross oceans for you will think twice in doing anything that will ruin a promise you made for each other.

Because white is beautiful

Having a fair complexion has been one of the major standards of beauty in many Asian countries influenced by Western culture. For Asians, when you say “Westerner,” the first thing that comes to our mind is white people.

Being white gives you passes to many places regardless of where you’re from —even if you don’t speak English well.

Fair complexions carry a perception of being clean and well-off. In the Philippines, whitening products are such a fad that you can buy them almost anywhere even in far rural places.  South Korea is also famous for plastic surgeries that they became known to have more plastic surgery procedures than anyone else on earth.

As you know, gays are very particular to beauty. The desire to be with a bearded tall white hunk who’s ready to sweep you off your feet and make love all night long is what plenty of Asian gay men desire.

Despite all the reasons why Asian gays choose Western men, I can assure you that Asians are among the most caring and loving partners in the world, gay or straight. You just have to pick the right one for you.

Thanks to our Filipino correspondent for this one.